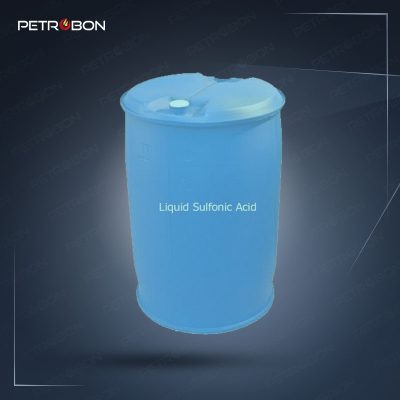 What is sulfonic acid?

Sulfonic acid or alkyl benzene sulfonic acid is an anionic surfactant in the form of a brown viscous liquid that is produced and used in Iran with a purity of 96%. As the name implies, this material is acidic and corroded and should be stored in steel tanks. The raw material of sulfonic acid is linear alkyl benzene, which is extracted from oil at Biston Petrochemical.

This acid is used as a catalyst to produce various chemical compounds in industry. This material causes the dye to adhere firmly to the fabric and improves the washability of wool and silk.

Long-chain aliphatic or aromatic sulfonic sodium salts are commonly used as detergents. Unlike conventional soaps, which contain carboxylic acid salts, soaps containing sulfonates do not form in white hard water because the calcium and magnesium ions in hard water, unlike carboxylates, do not form insoluble deposits with sulfonates.

Some derivatives of this acid, such as sulfa drugs, are important antibiotics in the pharmaceutical industry.

This substance is used as a foaming agent in the formulation of many detergent products, household detergents, washing powders, cake detergents, liquid soap, solid soap, etc. Sulfonic acid is also used in the production of pesticides to improve spray quality.

The widespread use of this substance in various industries, especially detergents, has led to the annual production of about 2 billion kg of alkyl benzene sulfate for various industrial purposes.

This acid is also used in the paint industry, and most washable dyes contain sulfonic acid or the sulfonyl functional group in their formulations.

Application of sulfonic acid in detergents and surfactants:

Detergents and surfactants are molecules that combine highly non-polar and highly polar groups. Traditionally, soaps have been a popular activator of fatty acids. Since the middle of the twentieth century, the use of sulfonic acids in advanced societies has surpassed that of soap.

Application of sulfonic acid in paints:

Many enterokinone dyes are produced or processed, if not more, by sulfonation. Sulfonic acids are highly prone to proteins and carbohydrates. For this reason, most paints are washable with sulfonic acids or have a sulfonyl functional group. It is actually used to make food colors.